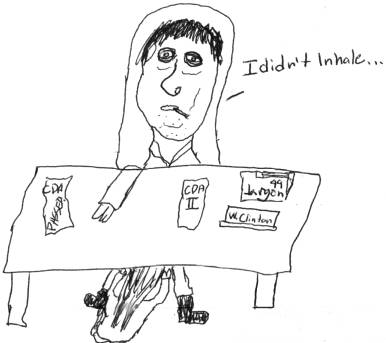 This is the only strip I ever got hate mail from. Amazingly. I dunno, I think it's rather funny. At least back in Bill Clinton's day it was still enjoyable to make fun of the President. Nowadays, both the current guy in the White House (Bush), and the guy who'll probably replace him (Kerry) are on my list of 'morons who should be exiled to the moon'. Sorry, I don't like either of them. Bring back McCain already, or hell, even get Clinton back, getting blow jobs in the white house was at least humourous. UPDATE 2009: Maybe Obama will be easier to make fun of. McCain proved himself to be a moron too. Vote Ron Paul!